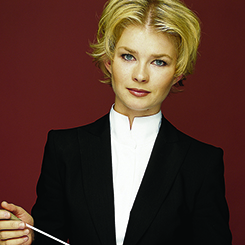 Anu Tali is an Estonian conductor. She has served as Music Director of the Sarasota Orchestra since 2013 and is co-founder of the Estonian-Finnish Symphony Orchestra which Tali and her twin sister Kadri Tali founded in 1997. Anu Tali is the orchestra’s conductor and Kadri Tali the manager. The orchestra later took on the name of the Nordic Symphony Orchestra (NSO). The NSO performs five times each year and has young members from fifteen different countries.

Tali was born in Tallinn, Estonia. She started her musical training as a pianist, and graduated from the Tallinn Music High School in 1991. She continued her studies in the Estonian Music Academy as a conductor with Kuno Areng, Toomas Kapten and Roman Matsov. From 1998 to 2000, she studied at the St. Petersburg State Conservatory with Ilya Mussin and later with Leonid Korchmar. She began conducting studies in 1995 with Jorma Panula at the Sibelius Academy in Helsinki.

Tali and her husband Hendrik Agur, director of the Gustav Adolf Grammar School in Talinn, were married in 2014, and the couple have a child, born in May 2015.