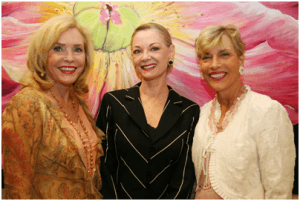 Founder Jean Weidner Goldstein was born in Zimbabwe in southern Africa (formerly the British Crown colony of Rhodesia.)  As a former internationally-renowned Principal dancer of the Stuttgart Ballet, Jean enjoyed a major career in dance, performing all over the world including Lincoln Center/Kennedy Center in the US, London Royal Opera House, Paris Opera House, and many other world-wide venues.  In addition to dancing, Jean has been a choreographer and founded ballet companies and ballet schools in Indiana and Florida, including Sarasota Ballet of Florida in 1990.  As a major supporter of the arts, Jean has earned accolades, appreciation and honors for each of her roles.  Sarasota’s Designing Women Boutique is one of her recent passionate endeavors.  For the first six years, Jean served as President and CEO, and remains actively involved today as CEO.

In addition to founding Sarasota Ballet of Florida, Jean also founded Sarasota Ballet’s “Dance the Next Generation” program in 1991.  “DNG”, developed to “inspire, motivate, and educate at risk children through the discipline of dance,” has been successful with many children who continue their education in school and life to become the best they can be.  Recently, through the generosity of donors, DNG has expanded from an eight-year program to 10 years.

Other local boards on which Jean has served include the Sarasota Opera, the Asolo Repertory Theatre Company and the Sarasota County Arts Council.

Jean’s honors range from “artist of the Year” (Noverre Choreographic Society, Germany) to “Women in Power (National Council of Jewish Women, Sarasota, Florida).  In 1997, she was elected to the Sarasota Community Hall of Fame Video Archives for her contributions to the community.

Co-Founder Diane Sampson Roskamp was born and raised in Washington, D.C.  She taught school for several years while raising her two sons. In 1980, Diane began a career in senior housing in Florida, and joined forces with Bob Roskamp to build a company called ‘Freedom Group, Inc.”  They developed many life-care communities across the country, specializing in upscale senior housing, assisted living centers, skilled nursing centers and Altzheimer’s support centers. They have a blended family of six children and six grandchildren.

Diane served as DWB Board President in 2009, and is now a Trustee Emeritus.  She has also served on other non-profit boards, including the Ringling College of Art and Design for five years (both of her sons are graduates of that institution).  She has also been on the boards of the Asolo Repertory Theatre, Sarasota Ballet of Florida, the Animal Rescue Coalition, NARSAD – the Mental Health Research Organization, and many others.  The Roskamps have a special passion to seeking a cure of Alzheimer’s disease in our lifetime, for which purpose they founded and actively participate in The Roskamp Institute, which is devoted to understanding causes and finding cures for neuropsychiatric and neurodegenerative disorders and addictions.

Co-Founder Margaret Wise is a native of Prentiss, Mississippi, and attended Mississippi State University. An entrepreneur, she owned and operated several different businesses before moving to Houston, Texas in 1984 when she married Bill Wise.  They moved to Sarasota in 1989 and Margaret has been one of the community’s most active supporters ever since.

Margaret is currently a board member of the Sarasota Memorial Healthcare Foundation, and also served as President of the board of Asolo Repertory Theatre, where she currently remains as board member.  She is also Associate board member of SPARCC (Safe Place and Rape Crisis Center).  Margaret was previously a member of the Board of Directors of The Pines of Sarasota, Florida Council on Arts & Culture, Sarasota Opera, and was also on the Sarasota Winefest Executive Committee.

Margaret has won numerous awards for her contributions to Sarasota including the Sarasota Opera Grand Finale and Impresario Awards, the Girls Inc. “She Knows Where She’s Going” award, Golden Gael Award from the Sarasota Herald Tribune, and more.  She was named to the Sarasota Community Hall of Fame Video Archives in 2001.