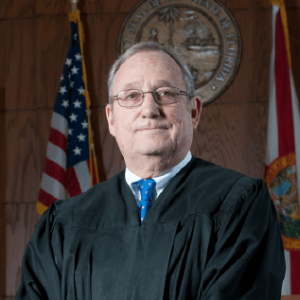 Judge Haworth is a Sarasota native. He was a former chief prosecutor for the circuit and a board certified civil trial attorney before taking the bench. He served on the Florida Supreme Court’s Foreclosure Task Force and is a current member of the Supreme Court’s Steering Committee on Families and Children in the Courts.

He was the first statewide recipient of the Supreme Court’s award for Judicial Excellence, presented by Chief Justice Jorge LaBarga on August 4, 2015, and he has been “Recognized for outstanding child advocacy by the Supreme Court and the Governor of the State of Florida for [his] dedication to abused and neglected children and service to the Guardian Ad Litem Program.”

He is a retired Army lieutenant colonel and Desert Storm veteran. He has three children and ten grandchildren.  After 26 years as a circuit judge he retired and took senior status on September 1, 2015.